"Some rich men go in for art collections, gay times on the Riviera, or extravagant living. But they all get satiated. That's why I stick to scientific experiments. You never get sick of too much knowledge." - Colonel George Fabyan

This past week we toured the Fabyan estate, named Riverbank, located in Geneva along the Fox River. George and Nelle Fabyan bought the house in 1905 and hired Frank Lloyd Wright to redesign and enlarge it in 1907. This was my first time to tour a Frank Lloyd Wright designed home, and it really was lovely, with beautiful windows and large, overhanging eaves.

The grounds were interesting to walk through as well. At one time there were some 300 acres that included a working farm with Jersey cattle, sheep, goats, pigs, corn, wheat and a chicken ranch where they raised approximately 20,000 chickens each year. Since Nelle Fabyan was also very interested in flowers and animals, she had an extensive greenhouse system built, which housed exotic pets as well—alligators, monkeys and birds. All these are now gone. But, there were lovely formal gardens, including a Japanese Garden. The Japanese Garden was reconstructed to look like the garden that was on the estate years ago, and it was beautiful!

What fascinated me most, though, was George Fabyan himself. He was interested in a debate over whether or not Sir Francis Bacon was the true author of Shakespeare's plays. So George hired Elizabeth Wells Gallup, a woman who claimed to have found ciphers in Shakespeare's plays, indicating that Bacon was their true author. He also recruited a staff of research assistants to help her, and acquired over 1,500 volumes of early Shakespeare editions and Bacon manuscripts from England for their use. 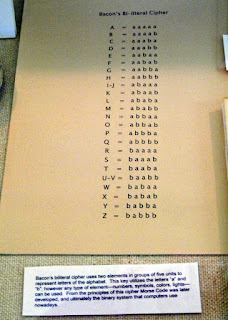 Bacon was known to have invented and used a "bilateral cipher" which used two different typefaces in each message. Each set of five letters in the printed text represented one letter in the coded message. Using capital and lowercase letters, for example, "Aaaa" might stand for"a," "aAaaa" might be "b," and "aaAaa" might be "c" ... on through"aAaAA" as "x," "aaAAA" as "y," and "AAAAa" as "z." However, the cipher could be subtle. The first line of "Macbeth" - "When shall we three meet again?" - could be printed in a combination of regular and italic letters to spell any five-letter encoded name, like "Elvis." Since the earliest editions of Shakespeare's works were printed in a jumble of different typefaces, Fabyan thought there just might be some truth in Gallup's claims. Although they didn't discover much to support this theory, they did inadvertently contribute to U.S. victory in both World Wars.

When the United States entered World War I in April 1917, the federal government had virtually no cryptographers, but Fabyan had plenty. So, the Shakespeare/Bacon research developed into code-breaking. William Friedman, a plant geneticist working on the Fabyan estate, with a natural talent for code-breaking, became the Director of Codes and Ciphers. And when the U.S. Army finally established its own Cipher Bureau, its first 88 officers were trained by Fabyan and Friedman at Riverbank.

Then William Friedman married Elizebeth Smith, one of his fellow code-breaking workers, in 1917. And after the war they moved to Washington D.C. and began lifelong careers as code breakers. William went on to head the team that broke the Japanese code P.U.R.P.L.E., which led to the end of World War II. Today, he is referred to as the Grandfather of Modern Cryptology by the National Security Agency.

Elizebeth Friedman did her code breaking for the Coast Guard and the Treasury Department. And she later established a secure communications system for the International Monetary Fund.
In 1955, the Friedmans revisited the Shakespeare question in their book, The Shakespearean Ciphers Examined. And although they thanked Fabyan for encouraging code studies, they concluded that they began their careers looking for something that did not exist.

And many, many thanks to the brave men and women of the Armed Forces, who risk their lives defending our liberty.
Posted by justme at 3:00 AM