Well the potatoes are done... 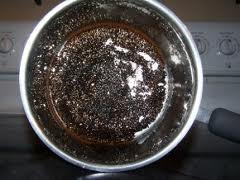 At first I thought my daughter's room smelled weird.  But when I stuck my head inside her doorway and took a big whiff, there was nothing.  As I walked down stairs to get a cup of tea, the odor increasing as I went, I finally discovered what did smell weird — it was my kitchen.

We're having friends over for dinner this evening, and one of the dishes I plan on serving is potato salad.  Thinking I'd get a jump on things, I put potatoes on to boil and then went upstairs to put in some hours at work (it's fiscal year end in a few days, don't you know).  But I completely forgot about the potatoes!

So the potatoes are "done."  And so are my pan, stove, and kitchen cupboards.

Actually, though, it's not as bad as the last time I did something like this.  One Sunday morning several years ago I put eggs on to boil and then left for church.  When we returned home hours later, the pan was completely black, burnt egg and egg shells were all over the stove, cupboards and kitchen ceiling, and our dog was cowering in the basement.  In fact, for several months afterwards our dog cowered and whined anytime the stove was turned on or a candle was lit.

But this time wasn't so bad.  Sure, the pan was black again, but there was only a little bit of burnt potatoes on the stove and cupboards.  Nothing was on the ceiling.  And, our dog wasn't cowering in the basement.

Of course, we no longer have a dog.  She was quite old and we had to have her put down because of quality of life issues.  I'm pretty sure my "egg incident" had nothing to do with those.
Posted by justme at 1:01 PM

Email ThisBlogThis!Share to TwitterShare to FacebookShare to Pinterest
Labels: life