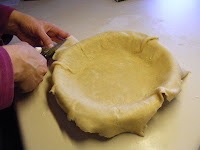 I know from talking to others and many years experience of my own that a good, flaky pie crust is a rare thing indeed. Over the years only two types of pie crust recipes have ever been recommended to me: oil based, and shortening/lard based. Sometimes these recipes turned out fairly well, but many times they were tasteless, tough, and not a bit flaky. They were merely shells in which to put pie ingredients, and quite frankly they detracted from the taste of the pies themselves. Then one day when looking through my newest cookbook for a pear pie recipe, I came upon a butter based crust.

About four years ago we had moved into a new house that had a pear tree in the backyard. It was exciting to have fresh fruit on our own property, but the tree was so loaded down with pears, branches were actually breaking under their weight. I didn't know what in the world I was going to do with all those pears---we could only eat so many fresh from the tree. So, I scoured my cookbooks for different ways to use them and discovered recipes for pear crumble, pear bread, pear sauce, pear coffee cake, and finally, pear pie. The pie was very good in and of itself, but the crust was simply outstanding, and I thought to myself, "I've finally found it---the perfect pie crust recipe!" The only problem was, it was a rather strange recipe in that the crust instructions were actually intertwined within the pie recipe. It took some calculating and quite a bit of trial and error on my part before I successfully extracted the crust from the pie instructions, and I must say it produces the best tasting and flakiest pie crust I've ever come across.

The recipe below is for a 1 crust pie. Of course, you should double it for pie recipes that call for a crust and top.

The Most Flaky and Buttery Pie Crust Recipe Ever

In a large bowl, combine flour and salt. Cut in butter until mixture resembles coarse crumbs. Stir in water, a tablespoon at a time, until mixture forms a ball.

Roll dough out to fit a 8 inch pie plate. (If you've never tried this trick, I've found it's easiest to roll out the crust on top a floured piece of wax paper and then use the wax paper to help place the crust into the pie plate.) Press the dough evenly into the bottom and sides of the pie plate.
Posted by justme at 7:49 PM